Not Skirting the Issue

A sermon written for 6/22/2008 and edited for 9/22/2019.  Longer than my usual, but in view of requests for the message, as well as the timeliness of the subject in the church, thought I would share. 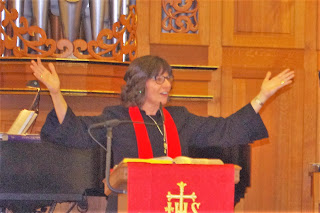 down, reminding us that we need God.  From the time of the fall, the people of God have worked to undo the curses, but Christ’s grace is the final solution.  Yet until He returns we have responsibility to redeem this creation, to share the freedom of the children of God with every person, to reverse the curse.  So when a farmer is faced with cursed ground, what does he do?  Does he dig in the soil with his fingernails?  No, he uses his gifts and resources to buy and use a tractor.  When a woman is in childbirth, does she endure the unnecessary pain?  No, she uses the gifts and resources available to her in modern medicine to get an epidural.  In exactly the same way, it is un-Scriptural to maintain the inequality of the sexes which threatens to squelch more than half of the church from using their gifts and sharing the good news.  With Miriam we women take up our tambourines and lead worship, because women are still called to be prophetesses and apostles and teachers and the hosts of God’s people.  If Christ’s cross truly brings us back to pre-fall conditions, then the inequality of the sexes has been handled by grace, and women are elevated once more to serve in all contexts of the church.  Ladies, pick up your tambourines!

I am greatly indebted to my wonderful husband, Rev. Greg Stone, author of a masterful exegesis paper on I Timothy 2, with a word study on hesychia.


Posted by wvlivingstone at 6:07 PM