Our Light in the Darkness 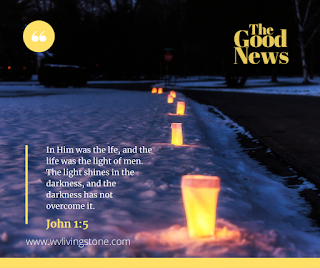 Christmas Eve 2020, the same, but different.  The sanctuary, beautifully decorated, had half the pews cordoned off with purple Advent tape (that had been there since Lent), and communion was pre-packaged.  An overflow space was prepared in fellowship hall should we exceed our governor’s mandates for maximum occupancy, and the candles for passing the light from the Christ candle were set out for worshippers.  Techy guys had been trained on our new high-definition camera, the sound system was linked and the wi-fi was up to speed for online broadcast. We thought we were ready for any contingency.

Then the snow hit.  White Christmas pouring down.  The temperature dropped 40° and the snow covered my yard and car in less than an hour; it settled on the wet roads, creating a slick icy layer underneath and the white topping made the lines invisible.  I left home three hours early to drive the 40 miles to church, avoiding over-cautious drivers going thirty miles an hour and dodging the crazy people going eighty, zipping in and out of traffic.  Anxiety was running high before I even arrived.  I stepped out into the quiet of the snow-covered twilight.

What with covid-19 (still plaguing us in 2020) and the sudden snow, few were in church (no overflow tonight!). But we believe that numbers don’t matter, so in-house or online the congregation is whoever shows up; the folks God wants there are always there.  And people got their money’s worth; we forged ahead with the full Christmas Eve service: lessons and carols, sermon, special choir pieces, organ solos, and communion.

Spiritually exhausted as I always am after worship, I climbed back in my car and headed home.  Typically I enjoy the Christmas lights and peace of stores finally shut down for Christmas, but not tonight. The roads were worse, not better, and there was no evidence that trucks had plowed or laid down salt or cinder.  With four-wheel drive and good tires, I wasn’t afraid, but I soon realized the long way home was the best: the back roads were particularly dangerous, so I headed back out to the main arteries.  The actuators on the side roads were so covered with snow the light wouldn’t change in my favor to make a left, so I had to make a right, then another right.  The next light wouldn’t change either, so I waited and waited and waited, and when traffic was clear for a country mile in each direction, I made my left anyway, and eventually got home by the long route, two hours instead of a 50-minute journey.

Making the last turn onto our street, my heart lifted when I saw: luminaries.  Every few feet on our road someone had placed luminaries, little bright sentinels reaching as far up the hill as I could see and leading the way home. Shining bravely in their little paper bags as the snow continued to fall, they would not be quenched.  I thought of the Light of the world shining in the darkness at Bethlehem, when the unexpected birth of the Christ Child changed the world.

Posted by wvlivingstone at 8:14 AM 2 comments: