And the angel said unto her, “Do not be afraid, Mary, for you have found favor with God.  And behold you will conceive in your womb and bear a son, and you shall call His name Jesus.  He will be great and will be called the Son of the Most High.  And the Lord God will give to Him the throne of His father David.  And He will reign over the house of Jacob forever, and of His Kingdom there will be no end.” Luke 1:30-33 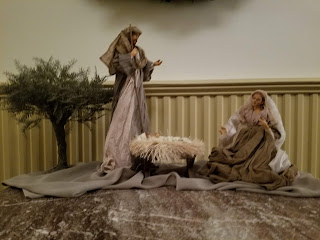 Dethroned royalty.  That was the tribe of Judah and the house of David when the angel Gabriel came to announce to Mary that she would bear the King of Israel.  Caesar was on the throne of Rome, and Herod was ruling Judea (and he was Rome’s puppet and had no Biblical right to rule) so we can understand Mary’s confusion. Her betrothed husband was a carpenter, her people lived in poverty trying to eek out a living under the Roman occupation.  Not what we usually associate with royalty.  Kings are rich and live in palaces and wear great clothes and have political power over all the people in the Kingdom.  They have servants and armies and people obey them.  But not dethroned royalty.  When the people of France revolted against their monarchy, Louis XVI, his family, and all his courtiers were guillotined.  When Tsar Nicholas of Russia was dethroned, he and his family were assassinated.  And when the house of David faltered, the line of David survived, but his heirs lived in poverty and obscurity.  Dethroned royalty can be a threat to new rulers, so if they are not dead, they had better be powerless.

How was the Kingship of Jesus Christ established?  Herod tries to kill Him when He is just a baby.  And then He, like His earthly parents, lives in obscurity, and learns and works at Joseph’s trade.  When He does come into the public eye, it is not as a military leader, but as a preacher, homeless and camping out in the open, traveling from place to place teaching about the Kingdom of God.  When He is illegally arrested and faces trial, He tells Pilate that His Kingship is not of this world.  Jesus takes up His royal position through suffering; He dies for us.  Now, after His death and resurrection He is King, seated in Heaven, and reigning with power.  Just as the angel Gabriel said, it is a forever throne and a forever Kingdom.  Every promise to David for a permanent kingship is fulfilled in Jesus Christ because Jesus reigns as King in eternity.

The Bible tells us we are – like our Savior – royalty.  But also like Him, our riches, our power, are not of this world.  Like Him we live in obscurity and we work for a living, our service and obedience are to God.  Like Him we tell others about the Kingdom of God, and how to get there. And as we do, God’s family grows, and royal children are born of the Spirit.  We follow King Jesus imitating His life, so that in eternity He will crown us as His own.

Posted by wvlivingstone at 3:59 AM